For free-ranging wild animals, or even pets that are dangerous for some reason, you may need a device to capture the animal. To protect the life of the animal, non-lethal devices such as animal net guns, animal dart guns, or tranquilizer guns are mostly used by professionals nowadays. In our article, you will learn how to use our weapons to capture and relocate dangerous animals or try a new non-lethal hunting method.

Why are animal net guns and other non-lethal weapons needed?

Animal control is present in various aspects of our lives: the fence around our guard dog’s hut, the sheepdog that herds the animals on the farm, but also the capture of stray animals and the relocation of local wildlife. The means used for this have gradually become more humane in recent decades – professional hunters in national parks only shoot animals that are dangerous to humans and consider relocation in all cases. ACES also endorses these humane capturing approaches with the equipment we have in store.

However, to do this, the animal must be caught, which is not always possible with the help of traps. In such cases humane solutions include non-lethal devices, such as animal net guns, animal dart guns or tranquilizer guns. 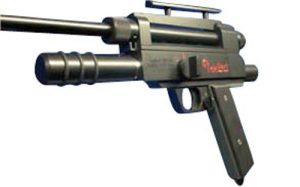 How do these weapons support animal control work?

Overall, these devices are characterized by capturing targets in a manner that is not dangerous to the animals and does not injure them. The following describes how these devices work and support animal control work:

The main advantage of these devices is therefore to protect the lives of the animals by making it unnecessary to shoot them. Runaway animals can be relocated, stray animals can be captured, but tranquilizer guns are also used in animal farms or zoos, for example, when rapid anaesthesia is required.

Our company, ACES, has been providing humane handling and capture equipment and training to those who work with animals for almost four decades. If you have any questions about animal control guns or are interested in training on how to use them, please do not hesitate to call us, we are always here to help.